update: 30 March 2021. Funny how it goes. This was a life quest to collect all the issues. I've had them all for over ten years now and do you think I've read through them yet?

When i was in high school way back in the 80's, a friend showed me a magazine called 'Epic Illustrated'. It was published by Marvel. This was a magazine that collated wonderful artists and writers into one place. people like Ken Macklin, Jim Starlin, Vaughn and Marc bode, John Muth, Rick Geary. Covers by the likes of Boris Vallejo, Richard Corben, Frank Frazetta. Stories that had their beginning in this magazine included The Last Galactus Story, Cobolt 60, Groo the Wanderer and Cerebus the Aardvaark. Until then i had no idea that a world like this existed. What an utterly fantastic magazine. I bought the very next Issue (number 28, february 1985). This was the first thing i'd ever NEEDED to buy. Even when we went on a holiday to Holland i bought an issue there! From the start of my fascination i was a little sad that there were serial stories. This meant that i wouldn't really be able to read the whole magazine until all the old stories had finished or i bought back issues. And with 27 back issues it never would have been feasable for a 15 year old! Even if it HAD crossed my mind. I was even sadder when the magazine finished up with issue 34 (february 1986). I really was lost and as melodramatic as this sounds, i think it had an effect on my psyche in that i was depressed that something so good would come to an end.

The reason Epic finished up was understandable though and i wish other magazines and products would consider this. The costs of publishing were getting expensive and the editors faced the choice of raising the price substantially, incorporating more advertising or decreasing the quality of printing. Instead they chose not to cheapen it in any form and so had to finish it up. I turned to Heavy Metal which is a similar publication from National Lampoon. Perhaps a bit more adult themed. Heavy Metal predates Epic. Even so, i much preferred Epic and after a while stopped buying Heavy Metal. I also read British mags like Revolver and 2000AD. I still wasn't satisfied however, even though some good things came out of them like Judge Dredd and Halo Jones.

Halo Jones actually lead me to finding issue one of Epic.In the early 90s i bought a Halo Jones t-shirt from a comic book shop in the U.S. It doesn't happen nowadays much but back then (and especially American businesses) you would get a christmas card for several years after buying just one thing, even though I live in Australia! Also of course you would get the odd update about what was on special, etc. One day i got a newsletter from them and it seems they had come across a whole box of brand new Epic Illustrated Issue Ones, never sold. Naturally i bought one. God knows why i didn't buy more! Still, how was i going to find the rest of the issues when most comic book shop owners would just look at me blankly? And even if they had heard of Epic Illustrated, It was hardly likely that someone was going to be bringing in their whole collection anytime soon!

Edit 15/11/10: I have since bought all 34 issues. Would you believe I still haven't read them all! Since there are two great websites with all the magazine covers in the links at the bottom, I've decided to pull my own covers from here. Instead i'll put up a few scans of selected artwork from the mags.

A quick word on Ebay. If you are reading this you may cherish this magazine as much as I. But the market doesn't share our view. I wouldn't (and haven't) paid more than about $5 US per issue, not including post. In fact, more than half of my Ebay purchased collection was one lot for about $40 Australian AND that included a half dozen other magazines! The other magazines were of a similar format called '1984' and '1994'. JUST took one out of the bag now to have a look. These are in B & W and very adult oriented. But i digress... My point is that people will try it on. That's their right to. Be patient and you will get these at a reasonable price. Check out these auctions: 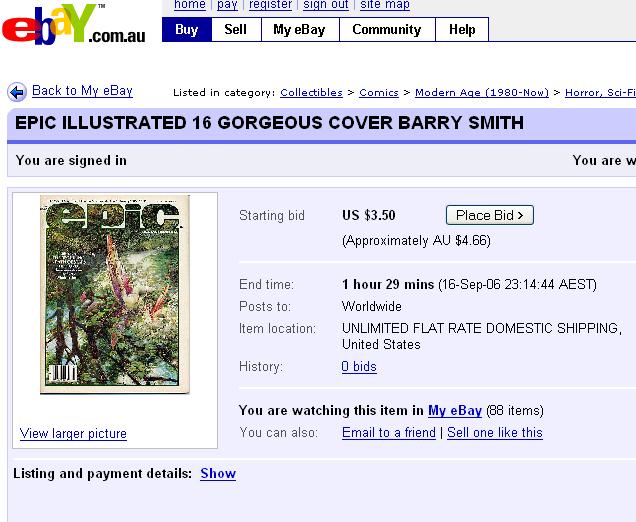 I'm about to bid on this and three others from the same seller. As you can see, no one has shown any interest yet 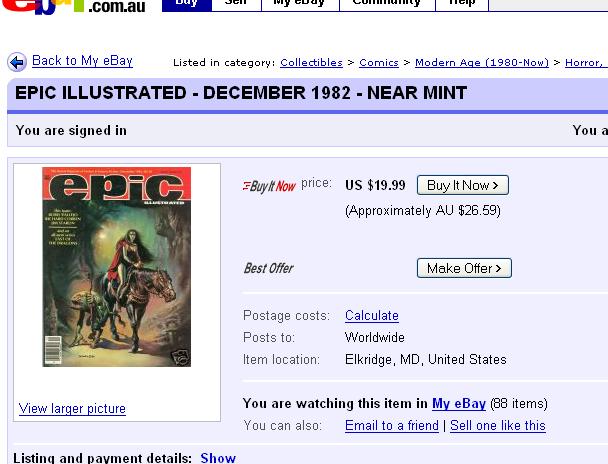 Another seller. Hope springs eternal! What i'd like to show you is the same issue from another seller that i missed while i had a rare break from the internet. It passed in at 99c.

A few selected images from within these hallowed magazines

I've been experimenting with SORTTABLE a simple javascript database thing. So to experiment, I inputted all issues of Epic Illustrated into a database. HERE

ha! as soon as i finished putting all my covers up i found this!: http://www.comics.org/covers.lasso?SeriesID=2559

heres another link to epic magazine. this features covers and a review of each issues contents: